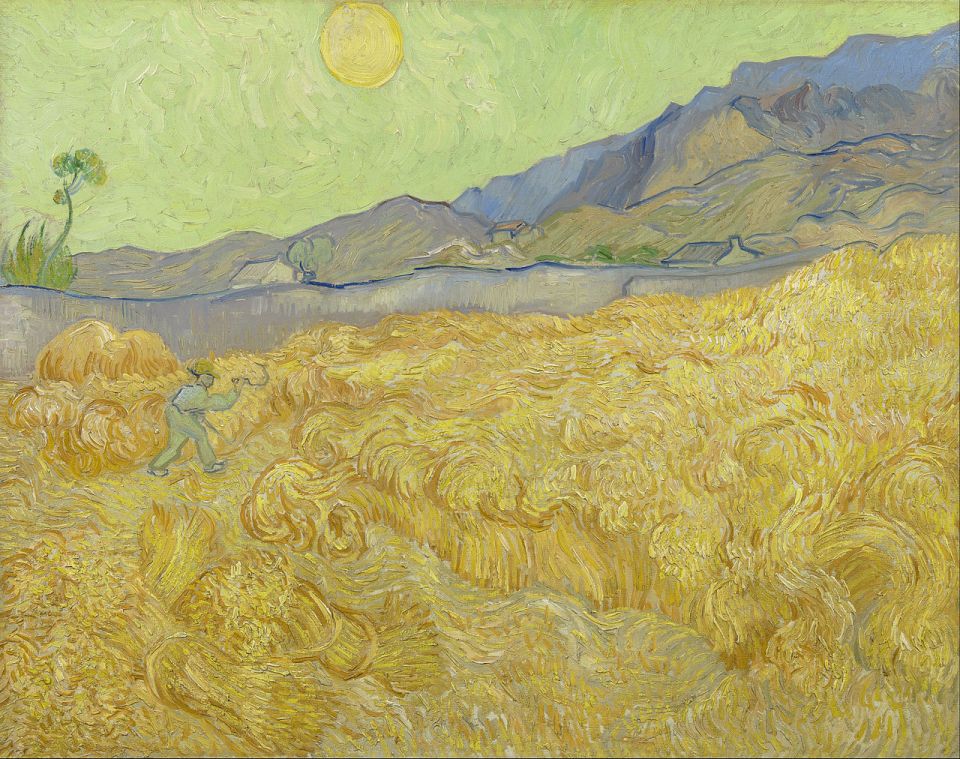 On our first journey we travel with light, particles/waves of energy, from their origin in the sun 150 million km from the earth; our companions will be photons, generated by fusion reactions deep within the surface of our near-perfectly spherical, 4.5 billion year old star.

When we look at the image above we see a harvest, a field illuminated by bright sunlight. It is, of course, a painting – and instantly recognisable as the work of Vincent van Gogh, the Dutch post-impressionist painter.

The painting is entitled Wheatfield with Reaper and was made in St Remy De Provence in France, Southern Europe, in September 1889. Since it was created 131 years ago the image has faded, the chromate yellow pigment used to capture the artists impressions of the scene has undergone chemical reactions rendering it less vivid.

A pigment is a material that changes the colour of reflected or transmitted light as the result of wavelength-selective absorption. The yellow pigment described above, although diminished in effect, still absorbs nearly all of the wavelengths of light – the colours of the rainbow if you will – apart from the yellow that forms this impression of a brightly lit wheatfield.

Of course what we are looking at above is not really a painting, it is a JPEG image – a photo of a painting, converted into coloured light by pixels on a screen. This is a different process to that which generates colour in pigments, one that uses dots of primary coloured lights in optical mixtures approximating the experience of faded chromate yellow.

There is a third mode in nature that generates colour impressions, used by butterflies and some birds. This is known as structural colour and is brought about by the affect of tiny structures composed of keratin that refract the wavelengths of sunlight to form impressions of a vivid colour. Sometimes these colours are iridescent owing to the fact that we receive the impression of different colours from different angles or viewpoints.

2. From Sun to Eye to Brain

The image, whether created by pigments, pixels or by tiny biological structures, enters the eye as variously coloured wavelengths and then interacts with the receptors for colour, the cone cells of the retina.

These cells convert the light through a chemical process into electrical nerve impulses that travel through the brain along the optical pathway.

As these nerve impulses are processed, the image breaks down into a series of visual components that are processed by specialist groups of cells within the tissue of the brain – a process that is occurring directly as you read these words.

The end point of this journey is in the optical cortex which is located at the back of the brain, at the base of the skull.

This is much the same journey that was taken by a number of photons generated deep within the sun many years ago. A journey that took 8 minutes at the speed of light to reach the earth. Some of these wavelengths/particles were absorbed by the natural colours of the land, some reflected into the eyes of a painter who took yellow pigment onto his brush and attempted to fix his impressions of the scene. A scene that has somewhat faded over the intervening decades, but which is still poignantly evocative of a late summer day in the Provencal France.